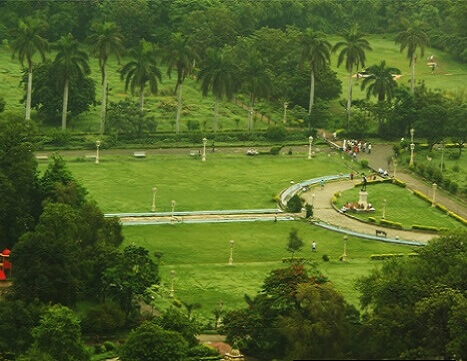 Gulab Bagh is an old Sub-City Level Park, having lush green campus and several places of attraction including ponds, library, zoological park, temples and several government offices. It houses 12 Bovri’s, 5 tubewells, 1 large pond (Kamal Talai – under rejuvenation), 1 zoological park, couple of temples – Arya Samaj, Hanuman, Dargah etc. and a range of Government offices like 2 forest offices, 2 PHED offices, 1 PWD office, 1 library etc. The park has 4 entrance gates, which are designed artistically as old masonry structure. Out of 4, only 2 gates are open for general public. There is appropriate parking facility is available at 2 operational entry gates, and it can currently accommodate 350 two wheelers and 50 car parking inside the park. The entire park is surrounded by a boundary wall, 3–5 m in height and made of mix of concrete, stone and brick.

Things to do at Gulab Bagh

1. Gulab Bagh has a library named Saraswati Library; it is the first library of Rajasthan. The museum has a famous and beautiful collection of antiques, curios, royal, household items and other relics from the past. It has around 32000 books related to history, archeology, Indology and some manuscripts. Books can also be taken from the library for a period of 14 days.

2. Navlakha Mahal is a religious place for Arya Samaj. It is located in the centermost area of the Gulab Bagh.

3. There is a small toy train in the zoo that is available for both adults and kids at a very nominal charge. The toy train departs and arrives from the station called Luv Kush station.

4. Kamal Talai- this is a vast artificial water body towards the northeast part of the garden. It is oval-shaped.

5. Miraj Jyortish Upvan- this is an acupressure park that is maintained by Miraj Products. The park will enrich you with knowledge of Ayurvedic and Non- Ayurvedic plants found all around the garden.

Gulab Bagh, also known as Sajjan Niwas Garden, was built by Maharana fateh Singh in the 1887. It is the fourth oldest zoo in the semi-continent. It spans across 66 acres of land,[1] and is hailed as one of the most beautiful and largest garden in Rajasthan.[2] By Maharana's volition, a horticulturist from Madras, T.H. Story, was appointed in 1882 to stock the garden with plants with medicinal values on the 66.5 acres of land and worked there till 1920. The garden consisted of a Lotus Pond, and many prominent trees that included many species of mangoes, guava, grapes, lemon, bor, mulberry, rayan, pomegranate, bananas, sapota, tamarind, bullock’s heart (ramphal), lichi, arjun trees, wood apple, karonda, campher, citron, jamun, pummelo, meetha neem, kargi lime, ficus species, anola, jack fruit, dhanverjia, grandi flora, jasmin, dawood etc. In the year 1882, all the trees had their name-plates denoting Hindi, English, and systematic botanical names, which are not the same now. A small pond existed in the garden before it was demolished for the construction of Water works complex. In this pond a water lily, Victoria sp., was initially planted. The leaf of Victoria could withstand a child on a chair kept on it, a property common to all the water-lilies of the genus due to plant's structure.

The Garden draws it name as Gulab Bagh due to the presence of a ranch where variety roses can be found in abundance. The garden was also called Bada Bagh but the name dropped has out of popular use.

Maharana Sajjan Singh placed the foundation stone of the Victoria museum(now called Saraswati Bhawan Library) in the garden on 2 November 1890. It was inaugurated by Lord Lansdown. Mr. Gauri Shankar Ojha was the first curator of this museum appointed in the year 1890. The museum had many rare artefacts and stone manuscripts dating from 3rd Centaury B.C. to 17th Centaury A.D.

British Prince Albert Victor unveiled a stone statue of Queen Victoria on 19 February 1890, in front of Victoria Museum which has now been replaced with a statue of Mahatma Gandhi.

Various Flower and Vegetable shows were organized in the Garden starting from the first one in 1888 by Maharana Fateh Singh. The zoo organized fights meant for entertainment between lions or tigers and wild boars. The zoo upon the fifth decade of its commencement included plenty of rare species including animals like Black Leopards, Rhinos, Ostriches, Zebras, hoolock gibbons, etc. most of the animals were transferred to other zoos in India after Independence

Gulab Bagh is an ancient sub-city level park, showcasing the lush green campus, with ponds, library, zoological park, temples, and many government offices. The park has four entrance gates, out of which only two are open to the general public.

The parking capacity of the garden includes 350 two-wheelers and 50 four-wheelers. The park has boundary wall of 3-5 m in height which is made of concrete, stone, and brick, offering a rusty yet elegant appearance.

Gulab Bagh is open all days of the week.

The doors of the Gulab Bagh open from 8 AM to 6 PM.

The cost of a ticket for Indian adult and child, for the garden is INR 25 per person. The camera fee for the zoo is INR 15. 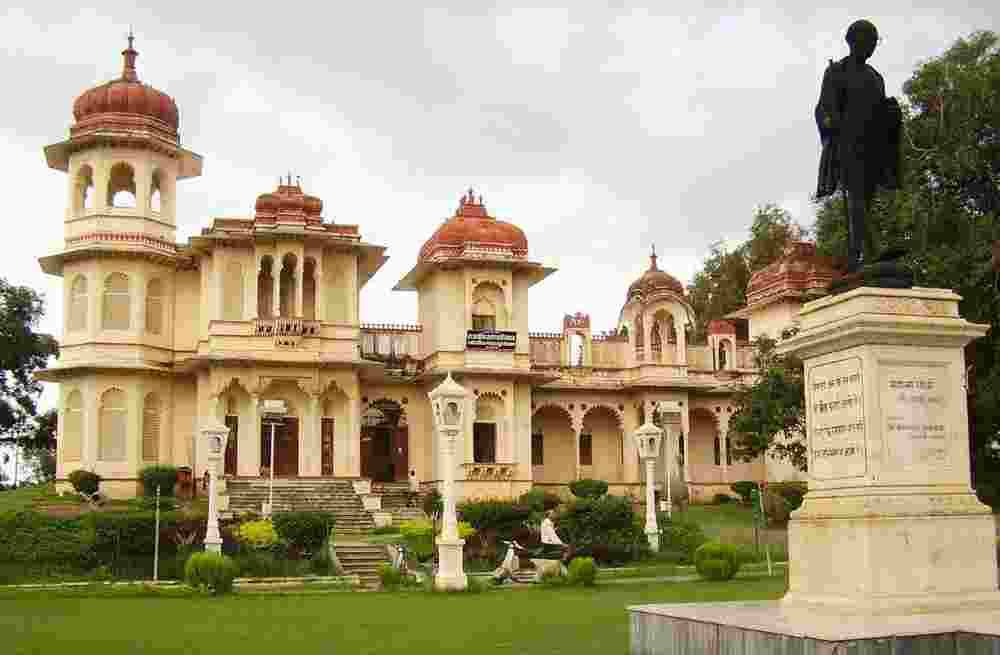 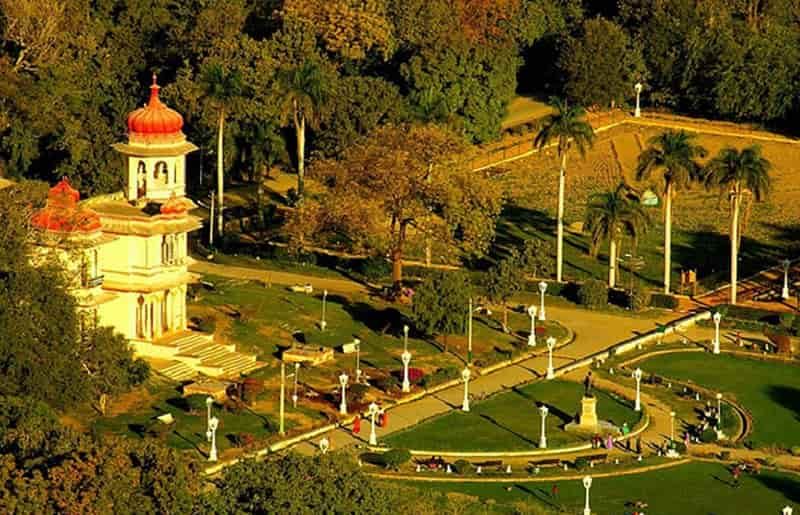 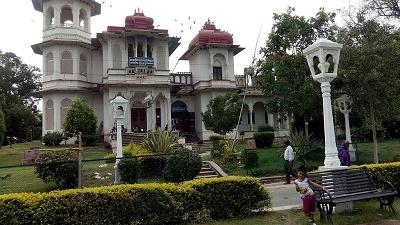 How to reach Gulab Bagh

You can reach Gulab Bagh via all three ways- Airways, waterways, and roadways.

· Airport- The airport is located at a distance of 20km from the Gulab Bagh. Bus, taxi, or private cars can be hired to cover the distance and help you reach your desired destination safe and sound.

· Railway station- The Udaipur Railway station is situated at a distance of 1 Km. You can take local transport like an auto-rickshaw or a bus to reach Gulab Bagh.

· Public transport- Udaipur is a well-connected city; you can either ply a private or a state-run bus to reach Gulab Bagh, The nearby states of Rajasthan like Gujarat, Madhya Pradesh, and Uttar Pradesh and Delhi NCR Transport Authority runs buses regularly to and fro from the city. A road trip to Udaipur can be taken from the well maintained and easy to drive National Highway 8.

Gulab Bagh - Places in Udaipur for Sightseeing at best price

GVW Rent a Car is providing service in the Tourism Sector Since 1989. We provide all Kind of Taxi Cars, SUVs, MUVs, Tempo Travellers, Mini coaches, Large coaches, Vintage Cars, Luxury Cars and all types of easy, smooth ,Familiar and comfortable travel facilities to the guests’ at the most nominal and Reasonable rates as well as possible.

Give Us a chance to welcome you!

Copyright © All rights reserved | This website is made with by DG Perfect Infotech Pvt. Ltd.